The Black Rock Desert. Northern Nevada. September 2011. High-power rocketry flyers from all over the world converge on this remote desert location northeast of Reno. They carry exotic homemade rockets constructed of aluminum, fiberglass and even carbon fiber, each powered by ammonium perchlorate composite propellant—the same rocket fuel used in the outboard boosters of the space shuttle. Their ambitious goal: To launch their own handmade rocket to more than 100,000 feet in altitude—and then recover that rocket safely for flight again. Large and Dangerous Rocket Ships tells the story of the history of high-power rocketry, from its humble beginnings in the late 1970s in the Southern California Desert, and the suburbs of Cleveland, Ohio, through the summer of 2018, when individual flyers are now reaching for the edges of Outer Space. It is also the story of the largest annual amateur rocketry event in the world, LDRS—the subject of several national television shows featured on the Discovery Channel and Science Channel.

Author Mark Canepa traces the development of high power from its origins in model rocketry and the dreaded Basement Bomber of the 1950s, to the creation of high-power’s premiere international rocketry organization, the Tripoli Rocketry Association. A portrait of the men and women who today fly under the banner of Tripoli and its cousin, the National Association of Rocketry, Large and Dangerous Rocket Ships carries the reader through 40 years of high-power rocketry excitement. It is the tale of rockets such as Down Right Ignorant, Project 463, and Stratospheric Dreams, and their incredible successes and equally spectacular failures. It is a history of garage-built vehicles that streak through the upper atmosphere faster than the speed of sound, or are sometimes reduced to molten pools of metal at the launch pad in the blink of an eye. It is a lesson in individualism and innovation on the cutting edge of hobby rocketry science and discovery today. 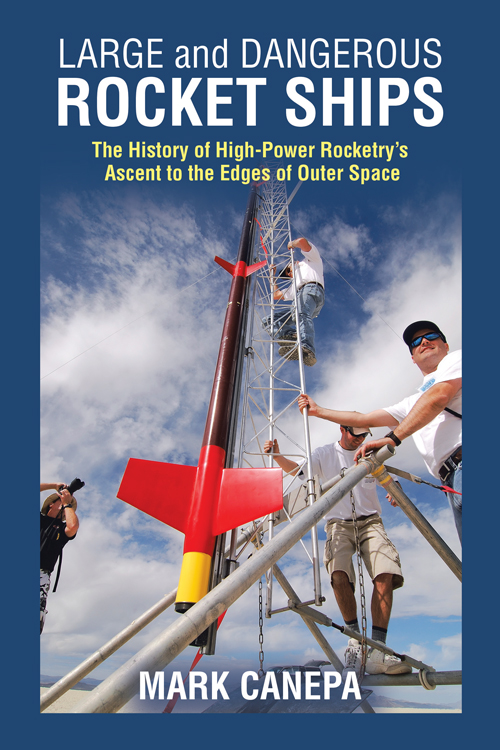